What is virtualization? Server virtualization is the process of running multiple servers off one physical box, thus allowing you to run multiple applications on fewer physical servers, and save money in the long haul.

As servers become more powerful, running a single server for a task creates additional overhead, additional costs, and the server itself remains underutilized. With virtualization, you can launch a new server, increase memory or processing power, and expand storage in minutes, as opposed to hours. Virtualization also makes disaster recovery more possible (details below), offering you peace of mind and greater flexibility in the event of a server crash or data center loss.

Need more reasons to Virtualize? We’ve listed a few for you!

The image below, provided by vmware.com, illustrates just how virtualization works. Typically, traditional standards would entail 1 server per application or purpose. Servers remain under utilized and their CPU and Memory availability goes to waste. Enter – Virtualization! By virtualizing the environment, every CPU and ounce of Memory is utilized to it’s fullest, allowing you to save money in the long run, lower overhead, and decrease your hardware footprint. 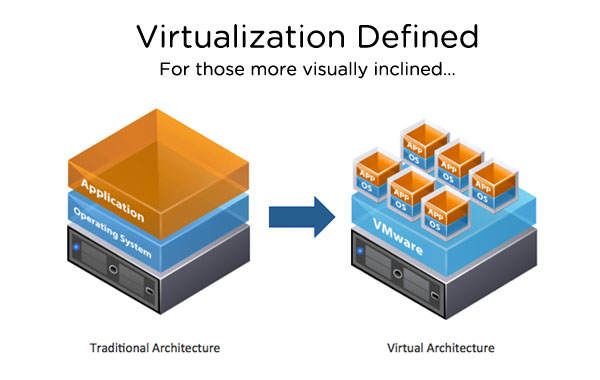 Still have questions regarding virtualization and if it’s right for you? Let us know and we’ll go over your infrastructure at no cost to determine the best way to move forward!